The resolution was to Run as administrator. Even though I was logged in to Windows as an Administrator I still had to explicitly run the SAS program in an administrative context (it’s a Windows security thing). As mentioned in the usage note, this is also documented in the SAS® 9.2 Intelligence Platform: System Administration Guide, Second Edition, Chapter 11 Using the %OMABAKUP Macro to Perform Backups and Restores, in the section Ensuring Appropriate User Credentials.

So I had a SAS usage note describing the problem and the solution. The trouble was I couldn’t quite get the instructions in the SAS usage note to work for me. When I right click over the Command Prompt window (or a PowerShell window for that matter) I don’t get a Run as administrator item. What did work for me though was to right mouse click over the Command Prompt item in the Windows Start Menu, and click the Run as administrator menu item – here’s a quick screenshot to clarify. 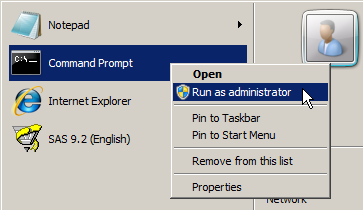 That opens a Command Prompt window running in an administrative context so I could then change to the metadata server directory and run the backup:

… a quick check of the SAS log shows everything worked as expected this time.