This post continues a series of examples on Advanced Expression-Based Filters for Metacoda Plug-ins. The recent Metacoda Plug-ins 6.1 R2 release added support for a new hasPermissionCondition boolean attribute that can be used in any filter bar on a table of Access Control Entries (ACEs), such as the ACE Reviewer.

You can copy and paste the following into the filter bar of the Metacoda ACE Reviewer to only show ACEs that include permissions conditions, such as those used for SAS OLAP Member-Level Permissions, BI Row-Level Permissions, or Visual Analytics Conditional Grants:

Here is an example of it in action:

Of course, if required, you can also negate it to filter out those rows with permission conditions:

If you have any questions about Metacoda Plug-ins, Advanced Expression-Based Filters, or hasPermissionCondition please leave a comment below. 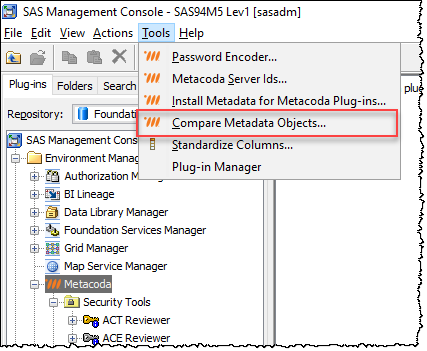 … this opens the comparison dialog where you can proceed to search for, and select, the two objects you want to compare. END_OF_DOCUMENT_TOKEN_TO_BE_REPLACED