Using the Metacoda Identity Sync Plug-in with a new SAS installation is easy. All of the defaults are based on common practices for synchronizing Active Directory users and groups with a SAS metadata server. Using the plug-in with an existing installation, where users and groups have already been synchronized using custom code, takes a little more planning. One of the ‘key’ things to do is to configure the plug-in to use the same external identity key id attribute that was used in the custom code. If you have the custom code, you can find the prior key choice in that code. This post is about helping you find and recognize those external identity keys without necessarily having to study the code.

An external identity key is a unique identifier for a user or group in an external identity source (e.g. Active Directory). It connects users within SAS metadata to the equivalent external user, so changes to the external user (including name changes) can be applied to the SAS user at some later date/time. In choosing a key from the external source, it is best to choose one that will stay constant over time, even after user name changes, directory reorganisation etc. There are a few different key choices available, and some are more likely to remain constant over time than others. Later in this post I will show examples of some common external identity key id attributes. The key that is chosen for groups doesn’t have to be the same as the one chosen for users either. I often see sAMAccountName being used for users and distinguishedName being used for groups. At Metacoda we recommend using objectGUID for both users and groups (as explained below). Once a Key Id Attribute has been chosen it is important to continue to use the same one over time. Switching the key choice after it has already been used for a synchronization is not an easy thing to do, so it is good to carefully consider the initial choice before deciding to synchronize users and groups. Of course, sometimes you inherit the process and have no choice in the matter.

When switching from one synchronization process to another, such as custom code to the Metacoda Identity Sync plug-in, it is important to continue to use the same key choice as before. If the key choices are different you might see something like this in the Identity Sync Plug-in, where every user or group looks like it will be (tag) deleted and re-added, and there are associated validation errors that prevent the sync from proceeding. 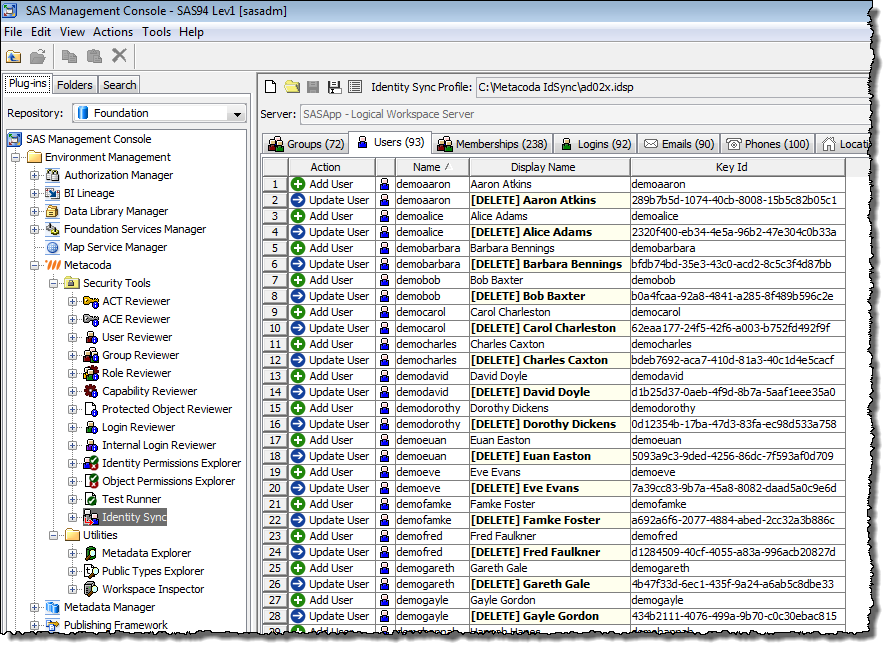 In the screenshot above, END_OF_DOCUMENT_TOKEN_TO_BE_REPLACED

Recently I’ve been working on using the Metacoda Identity Sync Plug-in to synchronize SAS platform identities (users and groups) with their counterparts from multiple Microsoft Active Directory (AD) Domains contained within a single Forest. In a future post I’ll talk about extending this to multiple domains from multiple trusted forests.

In the recent Metacoda Plug-ins 5.0 R5 release there have been a few enhancements to make it easier to sync with multiple domains (and avoid using custom code hooks):

I’ll show a relatively simple example. This might help other people who need to sync SAS users from multiple AD domains. The diagram below summarizes the Active Directory deployment: END_OF_DOCUMENT_TOKEN_TO_BE_REPLACED

This is another post in the series about configuring a SAS platform on Linux to use Integrated Windows Authentication (IWA), in this post I’m going to jot down some notes on steps 1-7 – configuring the Linux server for Active Directory (AD) Authentication.

Some time has passed since I wrote the original post, and a few things have changed. I’m now running SAS 9.4 M3, but this post should equally apply to SAS 9.4 M2. I have also switched the Linux distribution from Debian to CentOS 7.1. I am also using a much simpler method of joining the Linux server to the AD domain, using the realmd package (previously there were lots of individual steps using the underlying packages but realmd automates most of this). In this post I’m going to outline the simpler method using realmd of course.

I’ve been spending lots of time lately on SAS® platform identity synchronizations. I’m fairly confident that I’ve done more Microsoft Active Directory (AD) to SAS Metadata Server synchronizations in the past few weeks, than I’ve done in my entire career working with SAS software! :) The reason for this is that we’ve been doing lots of testing and demos for a new Metacoda Identity Sync Plug-in we’ve built that makes it easier for people to get started synchronizing identities with SAS metadata. With all these tests and demos, the SAS metadata backup and restore facility has also been an invaluable feature for allowing us to easily rewind and repeat the process – I’ve done my fair share of backup/restores these past few weeks too :)

The idea for the Metacoda Identity Sync Plug-in came after years of writing and customizing SAS programs using the standard SAS User Import Macros (%MDU macros). I found I had built up a set of common practices I would choose from depending on the customers requirements: things like name/display-name prefixing/suffixing; tagging for deletion instead of deleting outright; login manipulation; audit reporting etc. This plug-in is a way of packaging those practices up, as configurable options, with both a point-and-click and a batch interface. The outcome is an ability to rapidly implement identity synchronization, for a new or existing SAS platform installation, in a matter of minutes (rather than hours or days of writing code).

It has been a very rewarding experience building this new plug-in, and the feedback we’ve had so far has been very positive. Some of the interesting challenges along the way included:

If you’d like to see the Metacoda Identity Sync Plug-in in action, here’s a short 10 minute screencast. I show the initial configuration, building an Identity Sync Profile, and a small initial load of AD users, driven by the selection of an initial set of AD groups. That saved profile can then be re-used for further interactive synchronizations (adding, updating and deleting identities as appropriate), as well as being used to drive regular batch synchronizations (topics for future screencasts perhaps?).

We’ve been getting some great feedback from the people we have shown so far, so I hope you’ve found this video interesting too. If you’d like to find out more about this new plug-in, or any of our other Metacoda Plug-ins, please contact me, or visit the metacoda.com web site. We’re still taking on beta testers for the the upcoming Metacoda Plug-ins 5.0 release too.

Yesterday I wrote a post about configuring a SAS® 9.4 M2 installation on Linux for Integrated Windows Authentication (IWA) with mid-tier fallback form-based authentication to handle situations where IWA was not available or was disabled. I also repeated this configuration with a SAS Visual Analytics 7.1 installation (based on SAS 9.4 M2). This means that domain users within an organisation, who can participate in IWA, can simply open a browser, navigate to SAS Visual Analytics, and be logged in automatically using their Windows login. Other users without a domain account, on a machine that is not in the domain, or who have deliberately disabled IWA in their browser, will see the familiar SAS Logon Manager login form where they can manually provide a user id and password.

One of the other reasons I built this configuration was to find out what happened with SAS Visual Analytics Guest Access in an IWA fallback configuration like this. Essentially, I wanted to find out if I could get maximum flexibility by supporting IWA users, form-based authentication users, and guest/anonymous access all at the same time.

One of the reasons I wanted to test this was a reference I remembered seeing in the SAS documentation. The Web Authentication section of the SAS 9.4 Intelligence Platform: Security Administration Guide, Second Edition, lists one of the limits of Web Authentication as “Not compatible with anonymous access”. This is also repeated in the PUBLIC Access and Anonymous Access section too.

I ran 4 test scenarios to see how they were handled in an IWA with fallback configuration:
END_OF_DOCUMENT_TOKEN_TO_BE_REPLACED