In my upcoming SAS Forum Australia & New Zealand 2010 presentation Best Practices with SAS® 9 Metadata Security, I mention that is important for platform administrators to have an understanding of the Identity Hierarchy concept. In this post I provide a bit more information about the identity hierarchy, and associated identity precedence, than time allows in the presentation.

Learning about the Identity Hierarchy 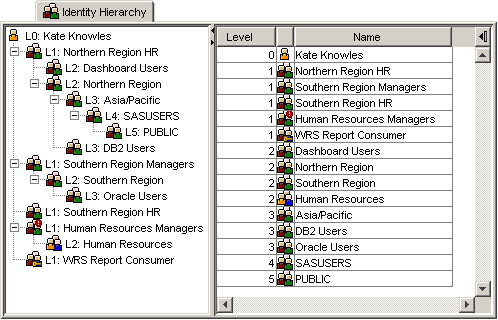 At the top of the identity hierarchy (level 0), with the highest identity precedence, is

Kate Knowles herself. Underneath Kate (at level 1), and with the next highest identity precedence, are the groups that Kate is a direct member of (

Northern Region), that have the level 1 groups as direct members (i.e. you will find the level 1 group listed on the Members tab of the level 2 group). Kate is an indirect member of the level 2 groups. This process continues until we exhaust all of the nested groups, which is at level 3 for Kate. Finally, at the deepest levels are the implicit groups: SASUSERS for everyone with a metadata identity; and PUBLIC for everyone with valid credentials.

You can see the screenshot shows two different views of the identity hierarchy: 1) the tree view shows the member relationships between the groups as well as the shortest path by which the user is a member of any given group; and 2) a flattened table view which just shows the user and the direct, indirect and implicit groups in order of identity precedence.

Importance of the Identity Hierarchy

The identity hierarchy is important because it is used to determine identity precedence which plays a key role in resolving conflicts. It can also be used to find any shared logins accessible to the user, via their group memberships, by walking the tree looking for logins on any of the groups.

To quote from the SAS® 9.2 Intelligence Platform Security Administration Guide:

In SAS 9.1.3 the identity hierarchy is only used to resolve authorization decisions and find shared logins. Its use in choosing a higher priority login is new in SAS 9.2.

A good understanding of the identity hierarchy allows you to understand and troubleshoot conflicts, and hopefully help you plan to avoid them where possible.

Most of the time the identity hierarchy is quite straightforward, but you can also get into some odd situations. Some of the potential issues to avoid include:

I am planning on following up this post with some additional examples and practices that build upon this discussion of the identity hierarchy, but that’s it for now. I hope this post is useful to those who may want to find out more than I can discuss in my forum presentation. Please let me know if you have any comments or questions.

I am occasionally asked whether it is possible to promote job flows between metadata repositories (e.g. DEV to TEST to PROD) using the SAS package file (SPK) import/export promotion feature. In past consulting work I have needed to promote job flows containing hundreds of jobs all interlinked with dependencies, so this is a topic close to my heart :)

In the early days of SAS 9.1.3 import/export of job flows was not supported and so the only choices availably back then were to either manually reconstruct the jobs flows in the target environment or do a full replication/promotion (what used to be called full promotion in SAS 9.1.3 is now called replication in SAS 9.2). Manually reconstructing jobs flows was a tedious and error-prone process especially with large and complicated job flows. Full replication/promotion was often not appropriate because it would overwrite the target environment completely. But that’s all history (and has been for a while) …

With SAS 9.2 there is no question about it – import and export of job flows is standard with SAS 9.2 so I will ignore it for the rest of this post and concentrate on SAS 9.1.3 instead.

Since the import/export of job flows was not initially supported in SAS 9.1.3, I occasionally talk to people who assume it’s still the case now (which is understandable). It’s great to see the smile spread across their faces when they find out it is actually possible with SAS 9.1.3 today – I remember back to how I felt when I first found out. I was faced with the prospect of manually reconstructing some awe-inspiring job flows and contacted SAS on the off-chance that someone might know a better way – which is how I was lucky enough to get to try out an early version. You can imagine how happy I was.

The ability to perform partial promotion of job flows crept relatively quietly into SAS 9.1.3 with a couple of hotfixes some time back. There is a usage note about it now too: Usage Note 31008: Hot Fixes 913SMC04 and 14JPS02 provide the capability to add job flows using partial promotion

So if you need to promote job flows between SAS 9.1.3 environments here are some pointers that you might find useful:

Update 10Jul2015: After 5 years, the macro discussed in this blog post is now very dated. If you still have SAS 9.1.3 then it should be ok, but for newer versions of SAS software (such as 9.2, 9.3 and 9.4) there are better options provided as standard by SAS Institute:

The inspiration for this post came from a question at sasprofessionals.net about code to create tree folders in a SAS® metadata repository. It sounded like a good challenge considering that:

I have uploaded the MKDIRMD.SAS code I wrote so it can be used by anyone that may have a need for it, or by those who might want to review it as an example program that uses the SAS Open Metadata Interface to query and update metadata. It includes examples of XMLSelect filters on both attribute criteria and association paths. I am publishing this code under the GNU LGPL license so it can be freely used. I have tested the code in both SAS 9.1.3 SP4 and SAS 9.2 M3 but it is provided “as-is” and should be used with care.

Be aware that with any code like this, that updates your metadata, it is strongly recommended that you have a recent backup (that is known to work) and test the code in a non-production environment. I prefer testing things like this in a private administrator environment (Lev9) since even development environments should be considered valuable.

I find myself referring to the SAS® Open Metadata Interface documentation on a very regular basis and have been keenly awaiting the availability of said documentation for SAS 9.2. I have been scanning the SAS 9.2 Product Documentation A-Z Listing every now and then hoping to see it appear one day but so far it has been absent. I just assumed it hadn’t been released yet. Today, however it occurred to me that perhaps I should try using the support.sas.com search facility instead (how come I didn’t think of that before I wondered). Expecting only hits relating to the SAS 9.1.3 docs, I was very pleasantly surprised to find SAS 9.2 Open Metadata Interface links in the results too.

In case anyone else is looking for this documentation, and to help me find it again, here are the relevant documents I found:

Now, of course, I am kicking myself wondering how long all of this documentation has actually been available while I have been waiting for it to appear in the A-Z list :) Can’t dwell on that now though – I have lots of reading ahead.

BTW – does anyone know if there is any published documentation for the SAS 9.2 Management Console Plug-in API available yet?

I was reminded today of the “Metadata reporting with SAS® software” presentation I did at a SNUG meeting way back in Sep 2007. It seems such a long time ago now, but when I read through it again it is still relevant today. The presentation is mainly about the use of PROC METADATA and the SAS XML Libname Engine (SXLE). It also lists a few metadata reports that I have found useful in the past and were done using this METADATA/SXLE technique:

Sample Report: reverse chronological list of all check-ins performed by SAS DI Studio users, with links to review the jobs and tables associated with each check-in 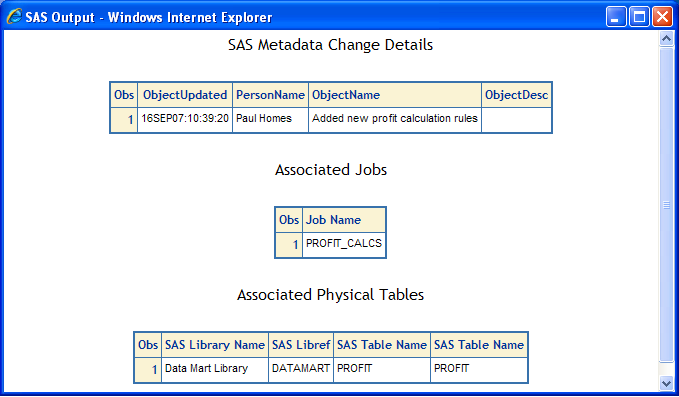 Sample Report: list of SAS DI Studio jobs that need to be re-deployed for scheduling

Sample Report: comparison of SAS DI Studio jobs from 2 repositories to identify those that need to be promoted

The presentation is available in PDF format as slides-only as well as slides-with-notes that provide a little more information. The slides show code fragments and so here are a couple of complete, albeit basic, examples that can be used as starting points for further work:

It was around this time that I had the idea to pursue metadata reporting by creating plug-ins for the SAS Management Console using Java. This ultimately resulted in the creation of our Metacoda Security Plug-ins product used to review and report on security metadata.