The way SAS metadata backups are done in SAS® 9.3 has changed significantly. Significantly for the better I think. There are big changes but they are well well worth it.

I’ll warn you now that this is a very long blog post with lots of images. I wanted to show someone how metadata backups are done in SAS 9.3 and also run a few tests for myself so a blog post seemed like a good idea. It turned out to be much longer than I expected though. I’ll split the post up into a short version and a long version. Here’s the short version first …

I think SAS 9.3 metadata backups are fantastic! They are integrated, configured by default, and continuous. It’s almost worth upgrading to SAS 9.3 just for the metadata backups (let alone all the other enhancements) :)

Some might say that these concepts have been around in other software for years. That may well be the case, but the fact that SAS Institute are now providing this method of metadata recovery in SAS 9.3 is still a stroke of genius in my opinion.

More information on SAS 9.3 metadata backups can be found in the SAS® 9.3 Intelligence Platform: System Administration Guide in the section Backing Up and Recovering the SAS Metadata Server

If you are only interested in the short version then stop reading here. Otherwise, please read on. You might want to grab a tea/coffee/beer/wine and settle in though. Don’t say I didn’t warn you. ;)

I wanted to test out the roll-forward recovery feature with SAS 9.3 metadata backups in a scenario that would not be recoverable using nightly SAS 9.2 or SAS 9.1.3 metadata backups. I decided to test recovering content that was both newly created and accidentally deleted, on the same day, between 2 consecutive nightly snapshots/backups. With an effective continuous backup in SAS 9.3, roll-forward recovery should allow a restore to the point in time between the content creation and its accidental deletion. The following timeline diagram illustrates the steps taken in this test: 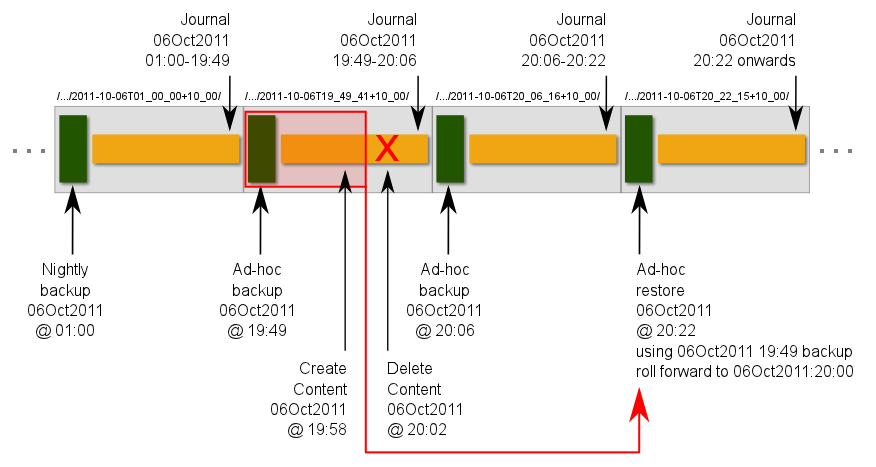 The sequence of events for this test was as follows:

The rest of this post shows, with a number of screenshots, some of the new features of SAS 9.3 metadata backups. It also illustrates the process of running the test discussed above via SAS Management Console 9.3.

The SAS Management Console 9.3 Metadata Management plug-in provides access to a historical list of metadata backups under the Metadata Utilities/Server Backup plug-in folder. The screenshot below shows a few of the available scheduled nightly 1am backups (the ones with the green tick icons) and a couple of expired backups (with the yellow warning icons). 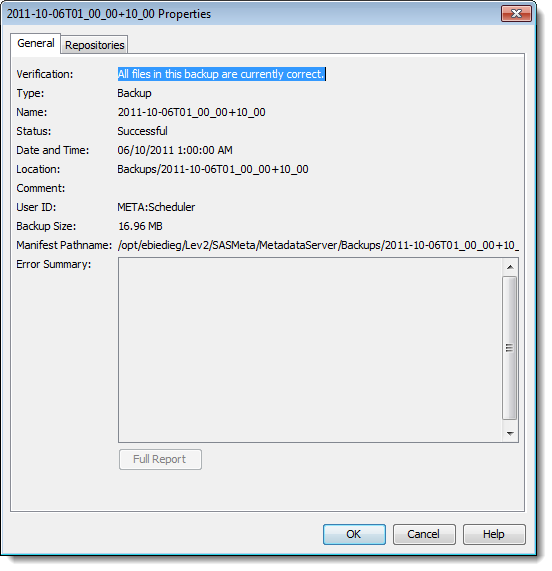 … and a Repositories tab showing which metadata repositories are included in the backup: 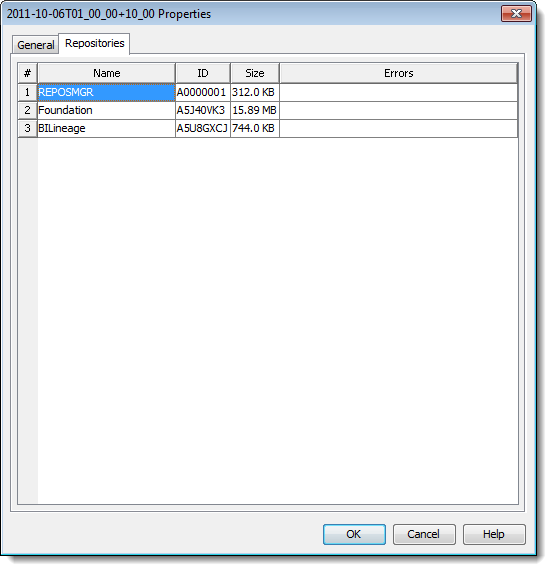 Metadata backups can be configured by right mouse clicking over the Server Backup plug-in folder and selecting one of the items from the context menu: 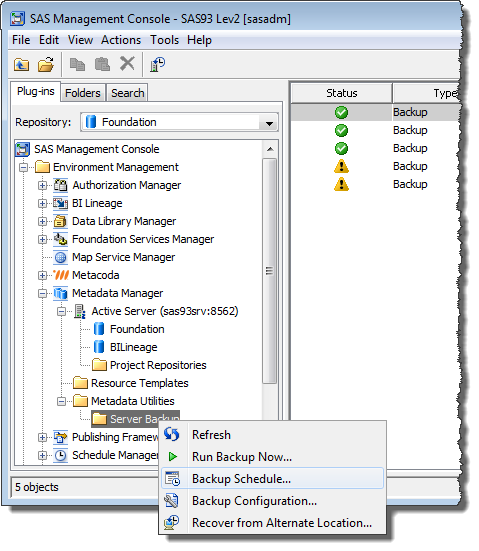 Selecting the “Backup Schedule…” context menu item displays a dialog where the backup schedule can be modified. The screenshot below shows the default schedule for backups: nightly backups at 1am every day of the week with a reorganization (reclaiming space for logically deleted metadata) on Mondays (i.e. 1am Monday morning or Sunday night depending on how you think about it).

Selecting the “Backup Configuration…” context menu item displays a dialog (shown below) where you can specify where you want the backups to be stored and how many days of backup history to keep. The defaults (unless modified during installation) are to keep 7 days of backups in the Backups folder underneath the main MetadataServer configuration folder. Depending on how your metadata server has been configured, this might potentially be on the same storage device/volume as your metadata repositories. If so, it would be advisable to move them to a different device/volume to improve your chances of being able to restore from backup if you happen to lose the storage volume the repositories are on. In terms of backup history, I personally feel 7 days is a bit short. If space allows, I prefer to keep around 1-3 months of backups. Usually I compress metadata backups to allow for more history. The option to automatically compress (zip, tar/gz, tar/bzip2 etc) backups during backup, and then expand them during restore, would be a useful enhancement I think. Whilst you probably wouldn’t want to do a full restore from more than a day or two ago, I have on occasion needed to export a metadata package from a 3 week old backup to import/restore partial content. I like to keep a basic Lev9 deployment available for such things. I could imagine another potential enhancement where you might use the Metadata Manager to export an SPK package of metadata as at a historical point in time (derived from a temporary roll-forward recovery) to immediately import (removing the need to use a Lev9 environment or equivalent). :idea: 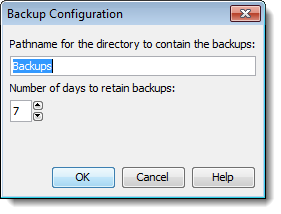 The “Recover from Alternate Location…” context menu item displays a dialog (shown below) where you can specify the location of an unlisted backup to restore from (a backup which is not in the list of historical backups). I haven’t used this yet but I imagine it would be useful in the situation of needing to do a temporary restore into a Lev9 private admin environment for the purposes of exporting a package of metadata for a partial restore/import. I notice there’s no browse button so it looks like a job for copy/paste.

The “Run Backup Now…” context menu item is used to perform a forced ad-hoc backup between normal scheduled backups. You get to provide a comment/reason for the backup which will be logged in the backup history. You can also elect to reorganize the repositories at the same time if you want, reclaiming any space taken up by logically deleted metadata. Bear in mind that reorganizing does involve a read-only pause of the the metadata server.

You would use this “Run Backup Now…” action to force an immediate backup or snapshot when required, such as just before doing something potentially dangerous, where you want the option to easily restore. In earlier versions of SAS this was required in order to have the ability to restore. With SAS 9.3 it doesn’t sound like we need to be so strict with this practice, since we now have the option for roll-forward recovery if we hadn’t perform a forced backup (but we did keep track of the time of the significant event). I think I’ll stick with performing explicit ad-hoc backups – if not just for recording comments in the backup history log. SAS 9.3 metadata backups don’t need to pause the metadata server, unless reorganizing, so we needn’t be worried about any small windows of unavailability for our users either – all the more reason to backup.

This is where I started my testing. At 19:49 just before I was about to do a test of create, delete, and roll-forward restore, I used “Run Backup Now…” to force an ad-hoc backup. This wasn’t really required. I could have done the testing based on the previous night’s backup but with a longer roll-forward. I just wanted to surround the event with a couple of ad-hoc backups to confirm that they wouldn’t have any negative impact on my ability to do the recovery.

After the ad-hoc backup was completed, an information dialog popped up to let me know:

I then set about creating some content that I could ‘accidentally’ delete and then attempt to restore. I recorded the times for the various events so I could use them to determine how much roll-forward would be required. I wanted to restore to the point after the creation but before the ‘accidental’ deletion.

At 19:58 I created my test content. This was simply a folder named “Test Restore” containing a stored process named “Test SP” as shown in the SAS Management Console 9.3 Folders tab below: 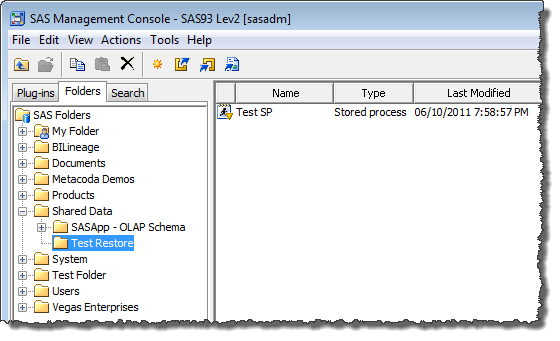 At 20:02 I then ‘accidentally’ deleted the “Test Restore” folder and all of its contents. 8-O

At 20:06 just after the ‘accidental’ deletion I did another ad-hoc backup. Once again, this wasn’t required. As mentioned before, I just wanted to surround the ‘disaster’ with a couple of ad-hoc backups to confirm that they wouldn’t have any negative impact on my ability to do the recovery.

The two backups immediately before, and after, the creation/deletion can be seen recorded in the backup history list in the screenshot below:

Now it was time to attempt the recovery.

The scenario as described would be unrecoverable if it were SAS 9.1.3 or SAS 9.2. There is no snapshot backup in between the creation and the deletion of the content. None of the available snapshot backups I had, when restored on their own (without roll-forward), would have the deleted content in them. However, by default, SAS 9.3 keeps a log of all metadata transactions since the most recent prior backup in a journal file (unless you configure it otherwise). This allows the transactions to be replayed, or rolled-forward, to any point in time.

To perform a roll-forward recovery in my test scenario, I just needed to choose a point in time where the content still existed, somewhere between the creation at 19:58 and the deletion at 20:02. Half way in between at 20:00 seemed like a reasonable choice. I could recover the deleted content by restoring the most recent backup prior to 20:00 (the 19:49 one) and then roll-forward the transactions up to 20:00.

As shown in the screenshot below I right mouse clicked on the 19:49 backup in the backup history list to select the “Recover from This Backup…” context menu item:

The initial “Recover from This Backup” dialog was then displayed: 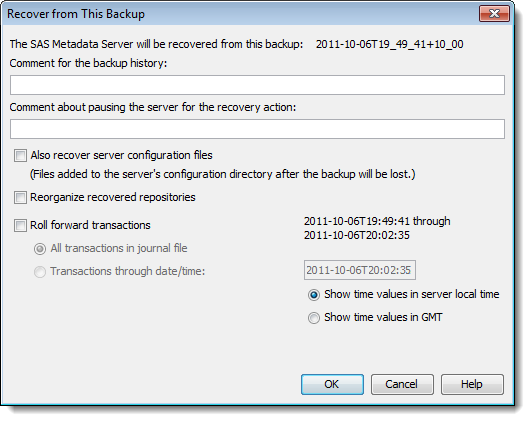 A few changes were made to this dialog to control how much recovery was required. I provided some comments, ticked the “Roll forward transactions” checkbox and provided the end time of 2011-10-06T20:00:00 as a local time (Brisbane is GMT+10). 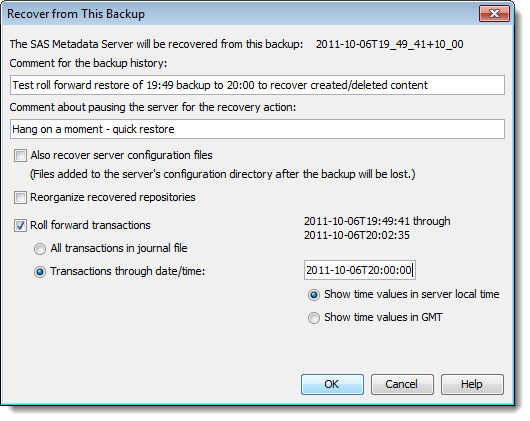 At 20:22 I clicked the OK button to start the restore process. A progress dialog was displayed:

… and when the restore was finished an information dialog popped up:

After the restore I checked the backup history list. I was a little surprised when I didn’t see a Restore entry type, but instead a Backup entry type.

After thinking about it for a little while, it kind of makes sense that a restore should involve a new backup and new journal from the point of restore.

Checking in the SAS Management Console 9.3 Folders tab I confirmed that the ‘accidentally’ deleted content had indeed been restored: 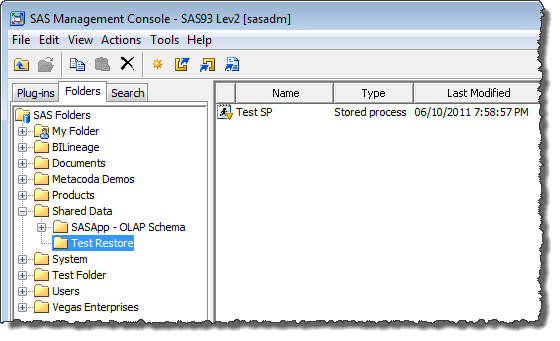 I even ran the stored process to double check it still ran successfully.

It is interesting to see how the backups are stored too. The screenshot below shows the directory structure for the Metadata Server/Backups folder: 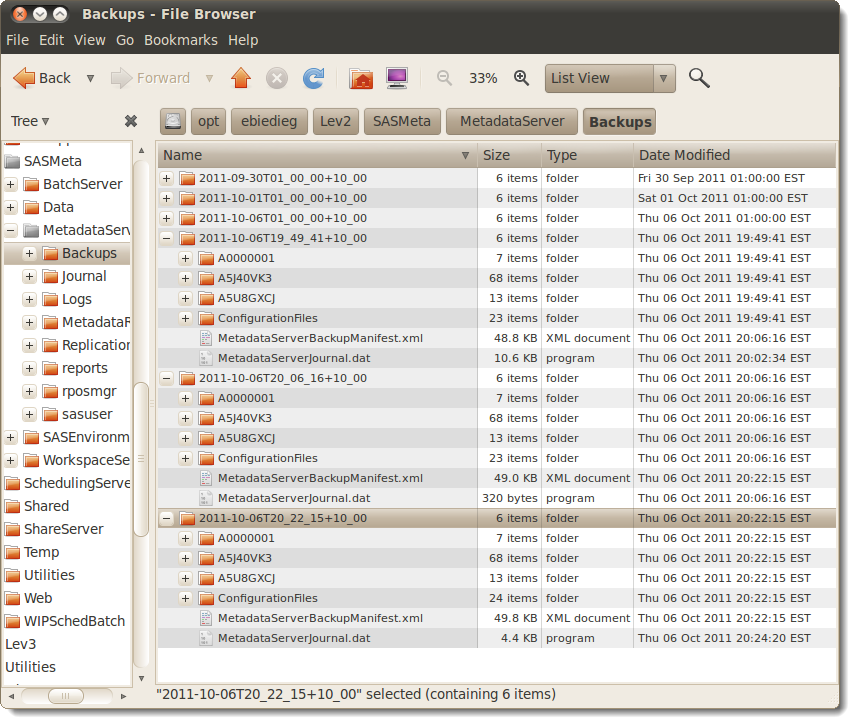 As I’m sure you’ve worked out by now, I’m most impressed with these enhancements to the SAS metadata backup and restore process in SAS 9.3. Whilst we hope to never need to use metadata backups, they can be business critical when they are required, and flexibility is paramount in limiting metadata loss in those rare situations. It’s very comforting to know that I should be able to recover from a much wider set of recovery scenarios with SAS 9.3, including a very fine level of control over the recovery time point. It really feels like we now have a metadata time machine that allows recovery with the absolute minimum loss of metadata changes right up to the disaster point itself.