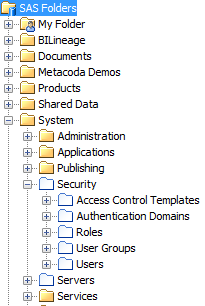 I started out by looking for my custom repository user groups in the normal /System/Security/User Groups folder but they weren’t there. I initially thought it might be because I needed to use the repository selector in the plug-ins tab to switch repository:

… after all, that’s how I would have located them in the User Manager plug-in. I still couldn’t find them.

… and there they were: the folder /TestingCustom/System/Security/User Groups with the user groups I had been looking for. It’s obvious when you think about it. I exported them into an spk file, and then imported them into my SAS 9.3 M2 installation.

You might notice that the /TestingCustom/System/Security folder only has sub-folders for Access Control Templates, Roles and User Groups, whereas the normal /System/Security folder for the Foundation repository also has Authentication Domains and Users. That’s because, as of SAS 9.2, Authentication Domains and Users should only exist in the Foundation repository so there are no custom repository virtual folders for them.